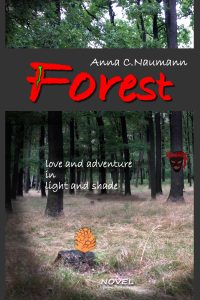 Who set the inn on fire? Who kidnapped the best girlfriend of 17-year old Allegra? Who is the masked man plying his dirty trade here, endangering Allegra too. Or is it a woman?

About 800 years after a great catastrophe, Allegra and her friends live an adventurous life in a small city and its surrounding forest. A strange governor tries to rule the region and proposes to Allegra who is in love with another man. There are rebels who want to free the county and robbers who terrify the population. Art and culture are forbidden here. But a young man, Antonio, appears, ignoring all these interdictions.

Join Allegra`s journey through adventure, love, desperation and joy. Disclose the secret about a golden pinecone, a mysterious wildcat, weird masks, a magic amulet and more. Dark and light romanticism awaits you – light and shade – as in a forest.

She walks in beauty like the night.
Of cloudless climes and starry skies;
And all that`s best of dark and bright
Meet in her aspect and her eyes.